The wave of artificial intelligence is coming, and more and more people are being replaced by robots. Whether it is manufacturing, finance or medical care, many people are worried about whether they can keep their jobs in the future.

Bill Gates, the founder of Microsoft, who has always cared about the future of mankind, also thought about this problem. He gave the method of taxing robots.

On February 17, local time, the US news website Quartz released a video interview with Gates. In the interview, Gates gave the answer that sounded a bit "ridiculous."

"When people say that the arrival of robots has caused unemployment, people's incomes are decreasing and losing money, they can slow down the speed of robot applications by taxing and even raising tax rates," Gates said.

He believes that the replacement of human work by robots can liberate productivity and allow humans to have more time to do more things that require compassion and understanding. But all of this requires financial support, and humans do not work, it is possible to reduce the total amount of tax.

"It should be clear that if the result of innovation is greater than the enthusiasm of people, it is not good, which means that people will not create it for positive aspects. Moreover, the total taxation does not allow some of them. The elements are happening well," Gates said.

In addition to talking about taxing robots, Gates also answered the role that government departments should play in the new environment. 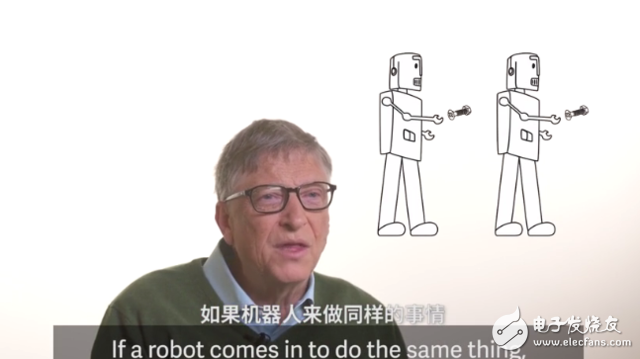 â€œIf you want to do something to solve the unfairness, you need more labor to help the low-income people. Therefore, this means that you can increase the social services for the elderly and the disabled, and let more labor enter the education sector. The business community can solve the problem that 'we will be richer, people will buy more' things, but the part that solves the unfairness, the government is the absolute protagonist. The advantage of taxation is that 'the resources are now given to you' and 'How do you work?' The two issues are separate," Gates said.

Interestingly, Gates is not the only one that proposes to tax robots.

On February 16, local time, the European Parliament voted on a legal proposal on robots. The proposal was proposed by Luxembourg Senator Matti Delvo, involving robots in various fields such as industry, medical care and entertainment. The proposal includes measures such as taxing robots to compensate for the unemployment caused by robots.

The International Federation of Robotics (IFR) believes that the collection of robotic taxes will have a rather negative impact on corporate innovation and employment competition. They believe that automation and robotics applications can create new jobs and increase productivity.

Quartz: What do you think is the robot tax?

Gates: We assume that now a human employee creates a value of $50,000 in the factory, and humans will pay taxes for this value. If the robot does the same thing, you will think that we should levy the same level of tax on the robot. .

What the world hopes is to seize this opportunity to liberate productivity while producing our existing goods and services, allowing us to better care for the elderly, reduce the size of the classroom, and help children with special needs. You know, all of this requires human compassion and understanding. These are still very, very unique things for human beings. In these areas, we are still very lacking in manpower to help.

So, if you can replace the manpower with automation, these well-trained, practical people, let them do other things, you will be far ahead. But you can't give up that part of the income tax because it's one of the sources of funding you need to support human workers.

Some of the funds come from the manpower saved, and the profits from cost savings are directly derived from some kind of â€œrobot taxâ€. I don't think robot companies will be angry because they may need to pay taxes. This method is ok.

Quartz: Is there any way to tax without hurting innovation?

Gates: When people say that the arrival of robots has caused unemployment and is a net loss for humans, you will be willing to raise the tax rate or even slow down the speed of robot applications, to think clearly: Ok, what about those groups that are particularly affected? What kind of transition project is useful? What type of financial support do they need?

Almost all areas have simultaneously entered the door of â€œmachine substitutionâ€, warehouse managers, drivers, cleaners... but there are also many meaningful types of work, and in the next 20 years, more manpower is provided to these jobs. Very helpful, it is also important to set the appropriate policy.

It should be clear that if the result of innovation is that people's overall fear is greater than enthusiasm, it is not good, which means that people will not shape it for positive aspects. Moreover, the total taxation does not allow some of these elements to occur well. But there are many different forms of innovation. For example, what kind of restaurant should you order? There is a machine in Silicon Valley that can make burgers without human hands: Really! No human hand touches it.

Quartz: You think more that the government should play an active role. Shouldn't the business community figure out the problem itself?

Gates: The business community is not clear. If you want to do something to solve the unfairness, you need more labor to help the low-income people. Therefore, this means that you can increase social services for the elderly and the disabled, and allow more labor to enter the education sector.

Business can solve the "we will be richer, people will buy more things" part, but the part that solves the unfairness, the government is the absolute protagonist. The advantage of taxation is that the two issues of "now resources are given to you" and "how do you work?"